Soooooooooooo I still have a couple of interviews left!  Sorry for the delay, friends!  Here's my interview with one of the pioneers (I'm calling her that 'cause I totally think she is!) of New Adult-ness - L! 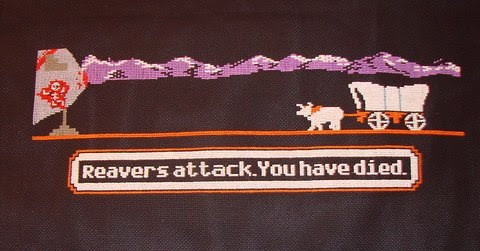 I was originally gonna put up a legit Oregon Trail picture, buttttt this is SO MUCH BETTER.

What do you want the world (or the 5 people who read my blog) to know about you?
Well, five people who read Alex's blog (though, I'm guessing she's just being overly modest here), I'm L.G. Kelso. Feel free to call me L, as most people do, or LG or Kelso or random-person-blabbing-over-here or ginger or whatever makes you happy. What would you care to know? I'm a writer with a love of books, blank and filled pages, horses and dirtbikes. Most of my writing falls into the New Adult category, but sometimes I write some YA or adult. I typically write paranormal or fantasy (UF or dark, high) novels, but I have two contemporary projects in the works along with my current paranormal series. I like kick ass females characters, independent characters, characters who fall in love through conversation and silence (no instalove for me) and a voice that will hold me captive. You can find me at lgkelso.blogspot.com and naalley.blogspot.com

What’s the first thing you wrote for fun? (that you can remember!)
I've been writing since I can remember. When I was little, I made my own "books" (folded paper) and even did illustrations. Luckily, as I got older, I got over the illustration part because you do not want to see my artwork. I wrote a lot in elementary school, but my clearest memory is a "novel" I started when I was 10, and it eventually turned into a WIP with my best friend. We wrote it throughout middle and high-school and had a blast doing so. It's also pretty amusing to read what we wrote when we were like 12. It's a horrible sort of amusing because some of it is just freaking awful, but amusing nonetheless.

Give us a little insight into your writing journey so far.
I'm working on getting my first novel published. I wrote it after graduating from college (though, some of it I did write while in class...but shhhh) and tested the water a bit last year with a few queries. The responses were good, and helpful. I put it away for a few months and recently started a revision to take it back to my original plan for it. It started as what is now being called New Adult, but at the time I started it, New Adult was not yet recognized. It kind of worked as "upper YA" but I had to make changes to make it fit the YA mold (the responses I got were positive, but would include things like "X character is too old for YA.... age him down").I didn't, because that would change the story, and decided to go back to the my original plans. Everything clicked in it when I accepted that it is NA and started doing the NA revisions. It's also paranormal, which is a little tough right now due to the relatively recent paranormal saturation in the market. I'm loving the revisions though, and am really happy with how they are going. I also have a contemporary WIP that is coming together a little slower than I planned (it deals with some tough matters and has mystery and thrillerness to it).

Star Wars, Star Trek, or…Firefly?
Hold please. *grabs shield and or boxing gloves* Now stay calm everyone: None of the above.

Nope.  Too late.  Freaking out.

What song’s been stuck in your head lately?
A song called Thrift Shop. It has this beat that just gets stuck in my head for days on end. Also, there are certain words that cue it in my head. My family has figured this out and now has a way to torture me by saying things like "this is * Expletive* awesome." And cue song. Again. Darnit.

Why do you write/read/lurve YA?
As I said, most of my writing is NA but I do write some YA, and some of my NA still could be considered upper YA. I think I write/read/lurve YA because it's about a stage in life where everything is so new. Lot's of firsts. It's a stage that many of us have very strong and emotional memories from. Not that we all would want to re-experience it in real life, but sometimes it's fun to experience it through the novel we read. It's also a very emotional stage, and that's fun to write. I tend to think more logically based than emotionally, so sometimes I enjoy going out of my own "thinking box" and looking at a situation with more emotional dependence.

Do you have a favorite place/time of day to write?
Not really. Whenever I can. Though I do especially enjoy writing in the morning, with the sun warming my office and a cup of coffee or tea in hand.

If you could only pick one book to read for the rest of your life, what would it be?
Oh. Man. That's hard. I have three different favorite series, and all of them want this spot. But, I'd probably have to go with one of The Black Jewels Trilogy novels by Anne Bishop or The Girl Who Played with Fire by Steig Larson. And out of those....argggg.... Black Jewels novel, I guess?

What was your favorite book of 2012?
Well, my favorite book published in 2012 would probably have to be The Golden Lily by Richelle Mead (those series are a contender for the above question as well).

Is there a 2013 book you’re looking forward to?
The next book in the Bloodlines series by Richelle Mead. There are more, but I'll leave it at that.

And, since I won an award for culturally under-represented authors: If you could pick a culture that you might not be totally familiar with to research and write a story about, which culture would it be?  And why?
Honestly, I don't think I could sum up an answer for this. I find various cultures interesting. I grew up in an area that was hugely impacted by multiple cultures and ethnicities. I don't think I could narrow down just one.


Thanks for stopping by to answer some questions, L.!  Tune back in tomorrow for my last interview!
Now, I'm gonna go try to get "Thrift Shop" out of my head...
Posted by Alex Brown at 5:54 PM