This blog post is brought to you by my lovely Orlando hotel's restaurant!  Since I'm almost done revising Part 3 of my Secret Star Wars story and am about to send it out to be ripped apart by my awesome and amazing CPs, I figured I might as well talk about it.  So here we go!


WARNING: GIFs AHEAD (but no spoilers, promise!)

My first year of french was in the eighth grade (I was also french student of the year! holla back!).  Our french teacher, Madame Terray, gave us this extra credit option that involved going to see a certain musical that one of the high schools was putting on.

What was said musical? 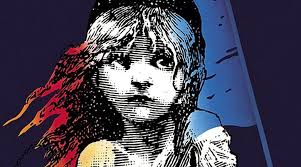 This one.  Or Les Miserables, if you want to be a little more accurate.

Mind you, I first saw this in the eighth grade, at a high school, and was kind of annoyed that there was, like, NO TALKING in this musical.

So I got my extra credit and wondered why I sat through three hours of watching people yell-sing at each other and then die.

Then, in high school, I actually started to appreciate it a little more, and our choir director took us all to NYC see a few musicals.  Les Mis was one of them.  I went in a little skeptical, and left absolutely blown away.  The amount of talent it takes to pull this whole show off is something I can't even fathom, and I've always loved francophone culture things, so I kind of fell in love with it then.

But I didn't do anything with it.  Yet.

So, this past December, I caught part of Spike's Star Wars marathon.  The day after I saw Les Mis in movie theaters with some old high school friends.  And, as I sat there on our couch, I was like... "HMMMMM. I want to write a story in space that's like Star Wars, but different.  How shall I do this???"

I was also listening to the Les Mis soundtrack.  I know, I know, right now you're probably all:

And it's totally okay.

So then I opened my ideas notebook and started writing.  And, no lie, in all caps it says:
LES MIS IN SPACEEEEEEEEEEEEEEEEEEE

It sounded so ridiculous that I immediately knew I wanted to try it.  I decided to make Eponine my main character, and re-write things from her perspective, since she was always my favorite anyways.

Eponine Thenardier became Pon Devrier, a lowly criminal and daughter of two pretty masterful con-artists who just wants to get out of the friend zone with her BFF, Rius (or Marius, if you know the story).  But I have to make things a bit more complicated than being perpetually stuck in the friend-zone, right?

So I threw in an Empress who drugs the masses to keep them complacent, a Rebellion that miiiiiiiiiiiiight not have the people's best interests at heart (the rebellion piece is how I tied Star Wars and Les Mis together!), a Captain who may or may not be losing his mind, and a Princess who tries to take matters into her own hands (and who my CPs love to hate :P).

I knew this was going to be a fun, complicated story to write, but I'm glad I stuck it out.  Even though sometimes when I was trying to navigate third person, I felt like this:

Also, the whole restaurant just judged me for laughing way too loudly at this...

I'm really proud of how this story turned out, and am excited to have it torn apart so I can make it even better :)

Okay, maybe not quite like that.  WHAT IS THIS FACE, MARIUS?!?

Oh, and I was planning on announcing this with singing and pomp and circumstance and whatnot, but I decided GIFs were better, because, GIFs.  So now you know why I've been crying like every night.  This is a sad, sad musical y'all (though my book might be just as sad. Maybe. Woops.).

*sniffles*
But the tears were SO WORTH IT!!!!  I really pushed myself, and I love the characters (and the Galaxy) that I created and got to play in for 86,000 words!

Just for funsies, here's the first(ish) page!  :D
----------------------------------------------------
This was taking too long.  Pon paced around the narrow alley, counting the seconds that trickled by as she waited for the signal.  Two small flashes of light were all she needed, but as time stretched on the unbroken darkness taunted her.
They shouldn’t have tried to do this tonight, but once Jorl set his mind to something, he couldn’t be talked out of it.  The Empress’s Announcement would be a good enough distraction, but that was only if they could get into the Aquifer in time.  If they started too late, they probably wouldn’t live to see the end of whatever surprise Empress Letienne planned to unleash on the Galaxy tonight.
Pon glanced up at the second window on the second floor.  Still nothing.  Stars Above, what was taking him so long?  She should have been the one to break in – she was quicker and better at sneaking around.  He was too clumsy.  He could get hurt.
“What’re you doing here?”  The guard’s voice broke through the silence, while his hand tried to break through Pon’s personal space.  She grabbed the guard’s hand and twisted it around his back, shoving him against the wall.
Rius stepped out from behind the corner, knocking the guard out with the hilt of his sword.  Pon let the guard fall to the ground, focusing on Rius’s light brown eyes.  They shone in the moonlight, sending a wave of warmth through her body.  She fought the urge to run her hands through his dark brown hair.  Friends didn’t run hands through each other’s hair.
“I could’ve taken care of him myself,” Pon stepped closer to him, keeping her hands firmly at her side.  He’d freak out if she threw herself at him, but she was getting dangerously close to not caring.
“I don’t doubt it,” Rius winked, grabbing her hand.  Pon’s heart tried its best to escape.  “I hope you’ll forgive me for helping you.”
“I think I’d like to stay mad for a little bit longer.”
“What can I do to make it up to you?”  His lips brushed the top of her hand and everything spun as her heart beat faster than a ship at warp speed.
“You can let me knock out the guard next time.”
“Deal,” Rius’s smile was even better in the moonlight.